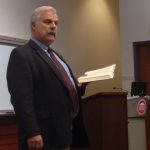 On Wednesday, January 3oth, Danny Toma, a veteran of over 22 years with the State Department, presented a lecture at The University of Mississippi Law School Weems Auditorium.  Mr. Toma served as a diplomat in Italy, Israel, Poland, Germany, and Ireland, as well as with a Provincial Reconstruction Team in southern Iraq during the early days of Operation Iraqi Freedom.  Since retiring, he has completed short-term assignments with the State Department as a contractor—work that has taken him to China, El Salvador, Cuba, the Dominican Republic, Greece, Moldova, the Czech Republic, and India.  His book America First: Understanding the Trump Doctrine was published in September and is an analysis of President Trump’s approach to foreign policy as well as a history of our interaction with various parts of the world and an identification of what U.S. national interests are across the globe.  In his talk, he laid out the book’s arguments, described the ways in which intelligence supports the policymaking process, and offered thoughts on careers in the State Department.