The Center for Intelligence and Security Studies hosted US Congressman Steve Russell on October 17, 2018.  Congressman Russell visited classes in the Intelligence and Security Studies, Public Policy and Leadership, and Political Science departments in the morning.  In the afternoon, he delivered a presentation attended by students from across campus as well as members of the Oxford community on his Army battalion’s intelligence-related efforts that led to former Iraqi President Saddam Hussein’s capture.  Congressman Russell—a member of the U.S. House Committee on Armed Services—offered a valuable, insider’s perspective on policymakers’ use of intelligence products and the critical importance of the US Intelligence Community to the warfighter.  He has served as a representative for Oklahoma’s 5th District since 2015.  He served in the Oklahoma Senate from 2008 to 2012 and in the US Army from 1985 to 2006. 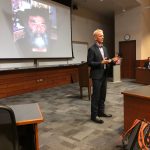